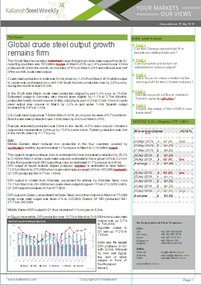 The World Steel Association (worldsteel) says that global crude steel output from its 64 reporting countries was 155 million tonnes in March 2019, up 4.9% year-on-year. China produced 80.3mt in the month, an increase of 10% on March 2018 and still well over half of the world’s crude steel output.