Kallanish Steel Weekly: Tk-Tata Steel merger failure surprises many, but not all (May 14, 2019) 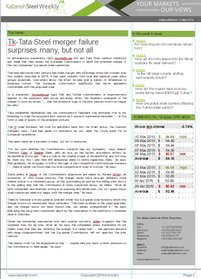 In simultaneous statements, both thyssenkrupp AG and Tata Steel Limited confirmed last week that they expect the European Commission to block the proposed merger of the two companies’ European steel operations.

The long-discussed joint venture has been fraught with difficulties since the concept was first publicly launched in 2016. It has seen criticism from local and national trade union groups especially, concerned about the effect on jobs and a variety of differences in business culture. The European Commission specifically has never appeared comfortable with the proposed deal.

In a statement, thyssenkrupp says that any further commitments or improvements applied to the proposed plan would adversely affect the intended synergies of the merger to such an extent “… that the economic logic of the joint venture would no longer be valid.”

Tata meanwhile highlighted that the commission’s feedback has indicated that is not intending to clear the proposed joint venture as it expects substantial remedies “… in the form of sale of assets of the proposed venture.”

The tk steel business will now be absorbed back into the main group, the German company says. Tata has given no indication as yet, what the future holds for its European operations.

The news came as a surprise to many, but not to everyone.

“I’m not sure whether the Commission’s decision has my sympathy,” says analyst Christian Obst of Baader Bank, with an eye on the recent acquisition activity by ArcelorMittal in Europe. “Take a look at the market power of ArcelorMittal, and still they let them buy Ilva – and then AM announces plans to revive capacities there,” he says. And generally, he struggles to follow the logic of the competition commissioner because “… there is rather too much than too little competition in steel in Europe,” he says.