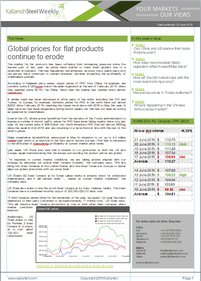 The market for flat products has been suffering from increasing pressure since the second part of last year, as prices have started to trend down globally due to a slowdown in demand. This has happened, nevertheless, as input costs (particularly iron ore prices) have continued to remain elevated, severely impacting the profitability of steelmakers globally.

According to Kallanish price series, export prices of HRC from China, for example, are currently some $120/tonne below the peak registered at the end of February 2018, when they reached some $570/t fob China. Since then the market has trended down almost continously.

A similar trend has been witnessed in other parts of the world, including the CIS and Turkey. In Europe, for example, domestic prices for HRC in the north have lost almost $200/t since February 2018, reaching the lowest level since mid-2016 in May this year. A slight recovery has been happening during recent weeks, but this has not been as strong as expected by steelmakers.

Even in the US, where prices benefitted from the decision of the Trump administration to impose a number of import tariffs, prices for HRC have been falling rapidly since July last year. At the current price of $560/short ton, North American HRC has lost almost $400/st since the peak in mid-2018 and are returning to a level more in line with the rest of the world’s prices.

Major steelmaker ArcelorMittal, announced in May its intention to cut up to 4.5 million tonnes/year worth of production in the flats sector across Europe. This was in response to the difficulties of maintaiining profitability at current market price levels.