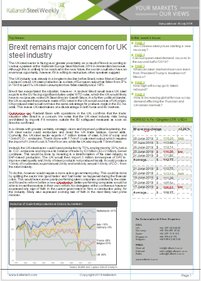 The UK steel sector is facing ever greater uncertainty as a result of Brexit, according to various speakers at the Kallanish Europe Steel Markets 2019 in Amsterdam last week. Although this is unlikely to be resolved in the near future, the sector could also have an enormous opportunity, however, if it is willing to restructure, other speakers suggest.

The UK industry was already in a long-term decline before Brexit, notes Marcel Genet of Laplace Conseil. UK steel production as a share of European output has fallen from 37% in 1948 to just 5%. UK steel consumption has fallen steadily since 1970.

Brexit has exacerbated the situation, however. A no-deal Brexit would leave UK steel exports to the EU facing significant duties under WTO rules, which the UK would likely have to reciprocate, notes UK Steel director Gareth Stace. In a further political blunder, the UK accepted that products made of EU steel in the UK would count as of UK origin. UK-produced steel would not have the same advantage for products made in the EU, he adds. This leaves UK steelmakers at a disadvantage in both home and EU markets.

Outokumpu ceo Roeland Baan with operations in the UK, confirms that the trade situation after Brexit is a concern. He notes that the UK steel industry risks being annihilated by imports if it remains outside the EU safeguard measures as soon as Brexit is confirmed.