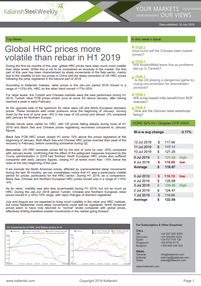 During the first six months of this year, global HRC prices have been much more volatile than rebar levels. While this is not to be considered an anomaly in the market, the first part of this year has been characterised by sharp movements in the flats sector, mainly due to the volatility of iron ore prices in China and the steep correction of US HRC prices following the jump registered in the second part of 2018.

For rebar levels, the Turkish and Chinese markets were the best performers during H1 2019. Turkish rebar FOB prices ended June at some 3% above January, after having reached a peak in early February.

At the opposite side of the spectrum for rebar were US and North European domestic prices. These remained well under pressure since the beginning of January, moving down by the end of June over -9% in the case of US prices and almost -3% compared with January for Northern Europe.

Similar trends were visible for HRC, with US prices falling steeply during most of H1 2019 and Black Sea and Chinese prices registering recoveries compared to January figures.