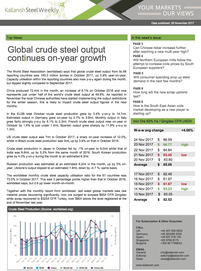 The World Steel Association (worldsteel) says that global crude steel output from its 66 reporting countries was 145.3 million tonnes in October 2017, up 5.9% year-on-year. Capacity utilisation within the reporting countries also rose y-o-y again during the month, but dipped slightly compared to September 2017.

China produced 72.4mt in the month, an increase of 6.1% on October 2016 and now represents just under half of the world’s crude steel output at 49.8%. In November the local Chinese authorities have begun to implement industrial output restrictions for the winter season and this is likely to impact crude steel output figures in the coming months.