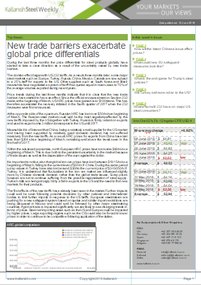 During the last three months the price differentials for steel products globally have started to take a clear direction as a result of the uncertainty raised by new trade barriers.

The domino effect began with US 232 tariffs. As a result, three months later, some major steel markets such as Europe, Turkey, Russia, China, Mexico, Canada are now subject to a 25% tariff for exports to the US. Other suppliers such as South Korea and Brazil meanwhile have negotiated a system of tariff-free quotas equal in most cases to 70% of the average volumes exported during recent years.

Price trends during the last three months indicate that it is clear that the new trade barriers have started to have an effect. Since the official announcement on Section 232 made at the beginning of March, US HRC prices have gained over $100/tonne. This has therefore accelerated the recovery initiated in the fourth quarter of 2017 when the 232 measures were first announced.

At the opposite side of the spectrum, Russian HRC has lost over $50/t since beginning of March. The Russian steel market could well be the most negatively-affected by the new tariffs imposed by the US together with Turkey. Russia is firmly reliant on exports and used to export some 3 million tonnes/year to the US until 2017.

Meanwhile it is of interest that China, being a relatively small supplier for the US market and having been supported by relatively good domestic demand, has not suffered massively from the new tariffs. As a result, HRC prices for exports from China have lost less than $20/t since beginning of March, remaining well above the levels seen in the first half of 2017.